Typing Speed > Blogs > What is a typing?

What is a Typing?

Typing is the process of writing or inputting text by pressing keys on a typewriter, computer keyboard, cell phone, or calculator. It can be distinguished from other means of text input, such as handwriting and speech recognition. Text can be in the form of letters, numbers and other symbols. The world's first typist was Lillian Sholes from Wisconsin,the daughter of Christopher Sholes, who invented the first practical typewriter.

The basic technique stands in contrast to hunt and peck typing in which the typist keeps his or her eyes on the source copy at all times. Touch typing also involves the use of the home row method, where typists keep their wrists up, rather than resting them on a desk or keyboard (which can cause carpal tunnel syndrome). To avoid this, typists should sit up tall, leaning slightly forward from the waist, place their feet flat on the floor in front of them with one foot slightly in front of the other, and keep their elbows close to their sides with forearms slanted slightly upward to the keyboard; fingers should be curved slightly and rest on the home row. Many touch typists also use keyboard shortcuts when typing on a computer. This allows them to edit their document without having to take their hands off the keyboard to use a mouse. An example of a keyboard shortcut is pressing the Ctrl key plus the S key to save a document as they type, or the Ctrl key plus the Z key to undo a mistake. Other shortcuts are the Ctrl key plus the C to copy and the Ctrl key and the v key to paste, and the Ctrl key and the X key to cut. Many experienced typists can feel or sense when they have made an error and can hit the ← Backspace key and make the correction with no increase in time between keystrokes.

Hunt and peck (two-fingered typing) is a common form of typing in which the typist presses each key individually. Instead of relying on the memorized position of keys, the typist must find each key by sight. Use of this method may also prevent the typist from being able to see what has been typed without glancing away from the keys. Although good accuracy may be achieved, any typing errors that are made may not be noticed immediately due to the user not looking at the screen. There is also the disadvantage that because fewer fingers are used, those that are used are forced to move a much greater distance.

There are many idiosyncratic typing styles in between novice-style "hunt and peck" and touch typing. For example, many "hunt and peck" typists have the keyboard layout memorized and are able to type while focusing their gaze on the screen. Some use just two fingers, while others use 3–6 fingers. Some use their fingers very consistently, with the same finger being used to type the same character every time, while others vary the way they use their fingers. One study examining 30 subjects, of varying different styles and expertise, has found minimal difference in typing speed between touch typists and self-taught hybrid typists.[3] According to the study, "The number of fingers does not determine typing speed... People using self-taught typing strategies were found to be as fast as trained typists... instead of the number of fingers, there are other factors that predict typing speed... fast typists... keep their hands fixed on one position, instead of moving them over the keyboard, and more consistently use the same finger to type a certain letter." To quote doctoral candidate Anna Feit: "We were surprised to observe that people who took a typing course, performed at similar average speed and accuracy, as those that taught typing to themselves and only used 6 fingers on average"

Some people combine touch typing and hunt and peck by using a buffering method. In the buffer method, the typist looks at the source copy, mentally stores one or several sentences, then looks at the keyboard and types out the buffer of sentences. This eliminates frequent up and down motions with the head and is used in typing competitions in which the typist is not well versed in touch typing.[clarification needed] Not normally used in day-to-day contact with keyboards, this buffer method is used only when time is of the essence.

A late 20th century trend in typing, primarily used with devices with small keyboards (such as PDAs and Smartphones), is thumbing or thumb typing. This can be accomplished using one or both thumbs. Similar to desktop keyboards and input devices, if a user overuses keys which need hard presses and/or have small and unergonomic layouts, it could cause thumb tendonitis or other repetitive strain injury.

Average Typing Speed: Why Is Is Important?

This may be for a variety of reasons. Boys, stereotypically, spend more time on multi player online games that require quick typing speeds in order to communicate with your teammates. The divide is not as high as you would think though, as approximately 45% of boys prefer typing, to 55% of girls. This is a statistic related only to touch typing, as there are high number of female dominated jobs that require typing skills, though not all of them require a high word per minute speed.
To give this a bit of context, writing things by hand is usually around 31 words per minute for memorized material, or 22 words per minute for copied material. This is a good speed for someone who only types out the occasional email to family, or for someone whose livelihood doesn't depend on their speed at a keyboard. For anyone else, a regiment of practice should be employed to improve speed and accuracy.
I'll say it again, just for retention: Practice. You wouldn't sit down at a piano and expect to be a concert level pianist, and you shouldn't sit down at a keyboard and expect to be a competition level typist either. Spend 30 minutes or so each day practicing. If you're just beginning, or working on switching over from hunt and peck style typing, then start from the beginning and work your way up. If you've already got some decent touch typing skills, then work on accuracy and speed drills. Keep track of your efforts over the course of a few weeks and you will see marked improvement.


With touch typing, it is important to start young. Studies have shown that for people ages 18 and younger, it is two times easier to learn to touch type properly. It's no different than learning a new language and multiple studies have proven that children learn and retain new languages much easier than adults do. Teaching children how to properly touch type may be the most important skill you can give them to help them gain success in the work place.So why is your average typing speed and typing accuracy so important? The fact of the matter is that typing skills are the most important thing to learn, at any age, to make you a more coveted employee.

How to improve & increase Typing Speed ?

How To Increase Typing Speed

Now that you’re convinced about the importance of typing quickly and accurately, let’s move on to the how’s of it. Here are six ways to significantly improve your typing speed and accuracy. 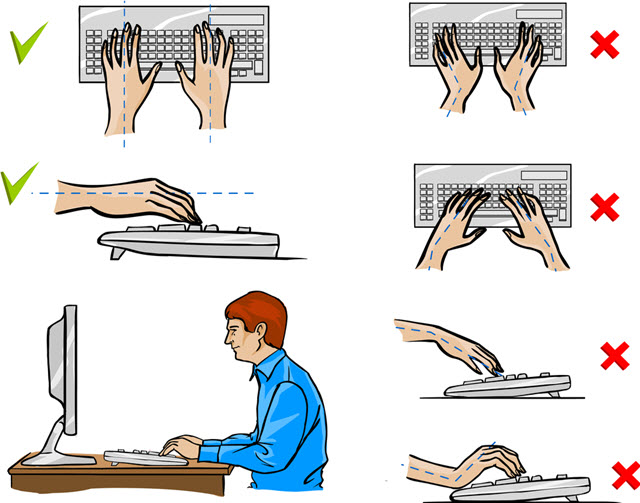 Which is the better way to learn typing, on a computer keyboard or typewriter